My hunt for the best Compact Line Array Speakers

I bought the best Compact Line Array Speakers I could find Six years ago. I sold a more rugged passive Electro-Voice PA system and bought a pair of Bose L1 compacts. With the Alesis Multimix 8 USB 2.0 mini mixer, I used them on stereo. I’ve gone from 300 lbs of gear to about 70 lbs. The L1 Compacts pair was perfect for solo and duo acts, DJ success and karaoke sessions.

But the system certainly lacks when it comes to heavy bass or a full band performance. Also, the Bose L1 Compact lacks the reverb, effects and Bluetooth listening provided by many of its newer counterparts.

At the moment they were the best available compact line array speakers to my needs. I started looking at alternatives recently including the Turbosound IP300, the Gemini PA-300BT and the JBL Eon Model. Both of these devices features a more powerful built-in mixer with reverb/effects, and built-in Bluetooth playback, which will have the extra strength and stability I need for larger gigs.

The compact line array for the Gemini WRX-843 is an outstanding sounding, lightweight speaker for both home practice and performance. It is lighter than the Bose L1 Compact, at just 24 pounds. The design of the column speaker consists of two extensions and one speaker array of 4 x 3 1/2′′ high-frequency drivers of aluminium. All three parts fit beautifully into the travel bag included. Unlike the Bose L1 Compact, there is no protective cover at the sub-woofer / amplifier assembly. The Gemini WRX-843 features a built-in 4-channel amplifier, Bluetooth, and built-in reverb feature that is located in the cabinet sub-woofer.

It boasts 250 Watts of power (800 Watts Peak) providing evenly balanced, full sound with enough power for practice or a small stage. I purchased one of those comparison models with my Bose L1 Compact. This unit isn’t as powerful as the Bose L1 Compact, but it really does sound good. The Bluetooth was easy to connect to, and a Shure SM58 sounds pretty damn good right through the XLR connections on board. I had trouble connecting my acoustic guitar, because I couldn’t get enough gain with the line setting (line / mic swap for each channel), but I had way too much gain when I tried using the mic setting.

My guitar has an incorporated pickup, without a preamp on board. With a guitar that has its own built-in preamp it might just be fine. The vocals were powerful but the reverb was a little misleading. Not almost as strong as the built-in reverb of Bose S1. Only be prepared to use it in combination with a small mini mixer with built-in effects for the price I suggest this unit. 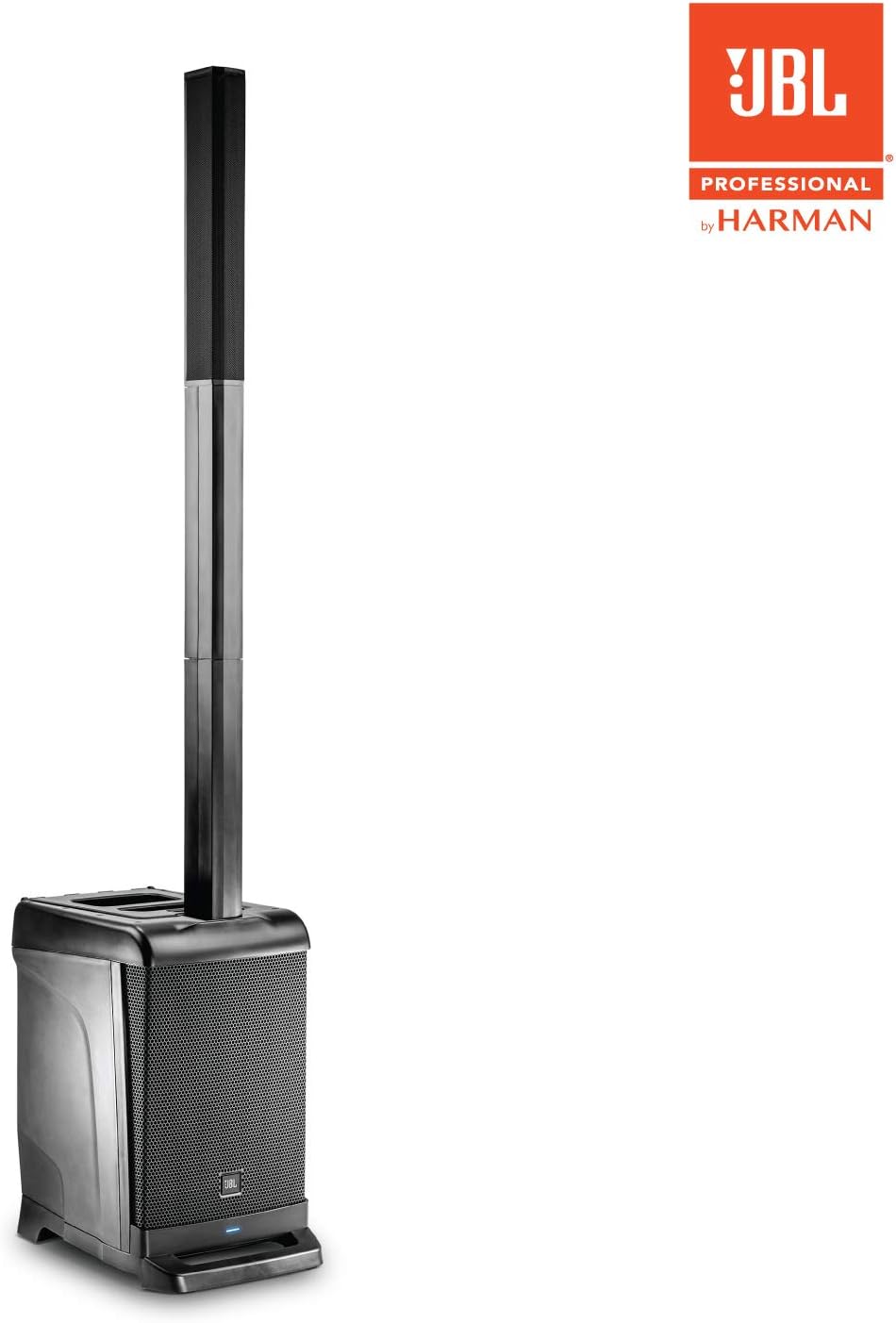 The JBL Eon One is our lineup’s most powerful compact line array speaker. The Eon One comes with a peak capacity of 380 Watts, a 10′′ sub-woofer, and (6) 2′′ line array drivers. That helps the Eon One to drive 118 SPL (based on specs from JBL). The line array drivers are arranged tilted up at the top of the stack and tilted down at the bottom to optimize vertical distribution (see my article titled “Compact Line Array VS Regular Speakers” for an example). The JBL Eon One also comes with a built-in 6 channel mixer with reverb and bluetooth streaming on each channel.

In this analysis, the JBL Eon One is filled with more power and channels than any other compact line array speaker but power and expansion comes at a price: heft. This speaker is 25 per cent heavier than the others at 41 pounds. Although it has the extra features I’m searching for, it’s going to be more difficult to switch around and won’t give me versatility for small duo acts. Yes, that would work, but for small gigs that would be more worrying and only two of them would probably not cut that out for a full band.

The Turbosound IP300 is a special, powered speaker compact line array. This choice is much cheaper and lighter than what I’m used to seeing. The IP300 has a peak capacity of 600 watts, two 6.5′′ woofers and (4) 2′′ line array drivers that are located in one cabinet. It can be mounted on a rod, or simply positioned on a sturdy surface. In terms of horizontal coverage the IP300 also competes with Bose. Turbosound advertises up to 180 degrees (same as the Compact L1). It has built-in Bluetooth streaming mixer and wireless control through an IOS app. The Turbosound IP300 is both compact and powerful with the ability to push a 122 SPL. For most small to medium sized events it undoubtedly has enough strength.

It is advanced DSP, and when attached to another IP300, let the user use all 6 channels (2 XLR inputs and 1 Bluetooth per speaker). The speakers can be connected via Bluetooth. The right side of the mix is one of the associated IP300’s. The other IP300 is to the left. This makes fast configuration and extension of wireless networks. When connected to the device, the IOS app changes to display all four ( 4) inputs with panning capability for each! To top it all off, the wireless onboard mixer also contains reverb which I think is a big bonus! At its price point, two can be bought in this review for roughly what one of the other compact line array speakers costs. If required, I could also add a pair of powered subs for bigger gigs.

I have used two L1 Compacts professionally for the past seven years. When I purchased them they were the only ultra-portable, self-contained, compact line array speakers. The machine is operated by a small line array composed of six 2′′ drivers designed to span approximately 180 degrees to the darn. This line array slips perfectly into one of two extensions of plastic tube speakers. Sitting directly on the table, these extensions connect into a base panel. The speaker-extensions of the L1 Compact are special. They house the wiring that power the line array and also provide setup height options. An 8′′ sub woofer from the floor panel drives out the bottom end.

The floor panel has four inputs: a balanced XLR microphone input, 1/4′′ unbalanced guitar input, 1/8′′ stereo audio and eventually a stereo pair of RCA inputs. Both inputs combine into two networks. One line for the amplifier, and the other for the remaining inputs. Each L1 Compact delivers 112 peak SPL, which doesn’t sound like much, but for most small to mid-size applications, it is definitely sufficient. The L1 Compact distribution pattern helps spread the sound much more uniformly than the other mentioned devices.

180 degrees horizontal x 40 degrees vertical range travels in both directions sounding distorted, perhaps trying to make up for the extra SPL of the other speakers. Such systems also have a few pitfalls. The low end is not as present as I would especially like at high volumes. Additionally, both of the speakers on the micro channel produced noise. To me, this isn’t a question, since I just use them in stereo with a compact mini mixer to handle effects. Because the speaker is old, a number of features I would like to see are lacking.

The main things on my list are more power, reverb on the mic and instrument channels, and Bluetooth streaming capability. An additional advantage will be mixer control from a remote IOS or Android device (really present in the IP300 Turbosound).

I selected the Turbosound IP300 after months of looking, because I think it is the best compact line array speaker in shootout. I purchased two IP300’s and used them for practice, both for small and big events. They are much powerful than the L1 Compacts. I can stream the Bluetooth stereo, connect a microphone and guitar and monitor the mix wireless on my android phone using Turbosound ‘s app.

I should add a little bit of reverb to sweeten my guitar and vocals too. In fact I purchased a pair of Behringer B1200D-Pro 12′′ powered subwoofers to fill the low end and the combination rocks! Far more powerful and portable than a Bose L1 Compact pair, without losing the quality of the recording. I hope you’ve found my way to choosing the right compact line array speakers for my needs and that inspires you to use a compact line array speaker for your performance!