What is a Tablet Controlled Mixer?

Typically a tablet-controlled mixer is a knobless, faderless mixing board that uses a tablet to control its parameters through a Wifi (or other) network connection. The beauty of this type of mixer is that you can take a tablet in the crowd and mix it from the front of the house without needing long wires or an audio snake multichannel! The benefit of this type of mixer is that band members will be allowed to have their own personal control mix. They can control their own mix through a tablet or cellular phone. Of course, this option is limited to the number of independent outputs the mixer has.

Another advantage of a tablet-controlled mixer is they usually give you more control over the mix! The makers of such mixers are not limited to the amount of on a specific board knob, buttons, and faders. The control surface is a tablet or computer display with unlimited options. Multi-band Parametric EQs, 31 band EQ with RTA, independent channel compressors and limiters, and multiple independent effects processors are only a couple of the goodies these mixers give. Actually there are small variants of this type of mixer which only have a few inputs and outputs. These portable mini mixers are ideal for smaller acts who just want simplicity and easy access.

Start comparing now the Behringer XR12, the Midas MR12, the Soundcraft Ui12 and the Mackie ProDX8 and find out which tablet-controlled mixer is the best for your needs and budget! 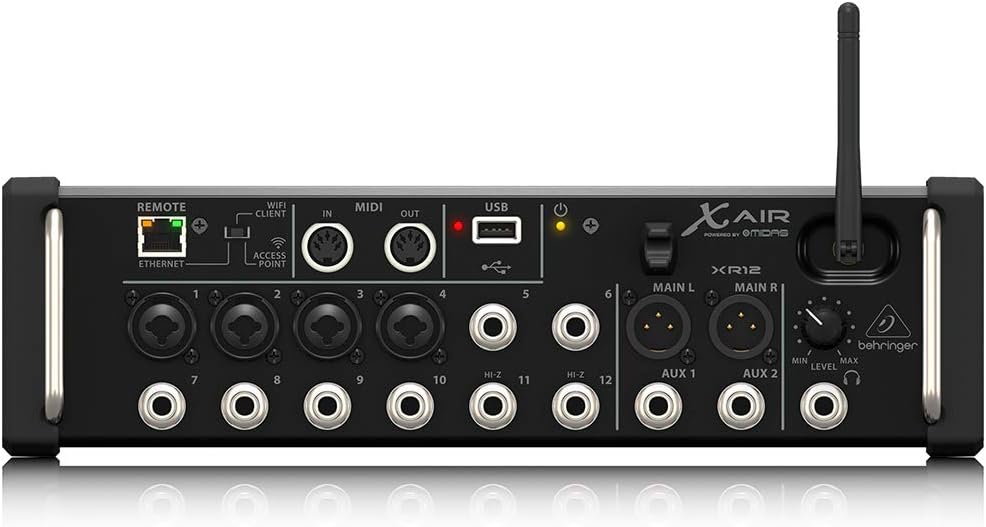 The Behringer XR12 Tablet Controlled Mixer is the child of the Behringer’s XAir mixer lineup. It has four Midas preamps designed for microphones, six balanced inputs 1/4′′ and two instrument inputs 1/4′′. At this price point also the XR12 has ample monitoring capabilities for a wireless mixer. Also used are two balanced XLR key outputs (left and right), two 1/4 “balanced auxiliary outputs, and a 1/4” headset monitor output on a separate bus! Digital I / o is limited to a USB input that can host a 2-channel recording or playback usb thumb drive. In addition, the Behringer XR12 comes with numerous mixer control options.

A Wifi router is built in, and an ethernet port is also on board, as is Midi I / o for full digital control by physical controllers, Macs, PCs, Linux, iPad, iPhone and Android! The XR12 doesn’t disappoint under the hood either. There are four engines with effects, full dynamics on-stage, a 31 band EQ with RTA or a 6 band parametric EQ on the main bus all at your fingertips. Inside the XR12 the software is the exact same software found in the larger XAir mixers. Also the XR12 comes with rack ears for those who want their investment mounted on rack. At $249.00, this compact wireless dynamo can hardly go wrong! 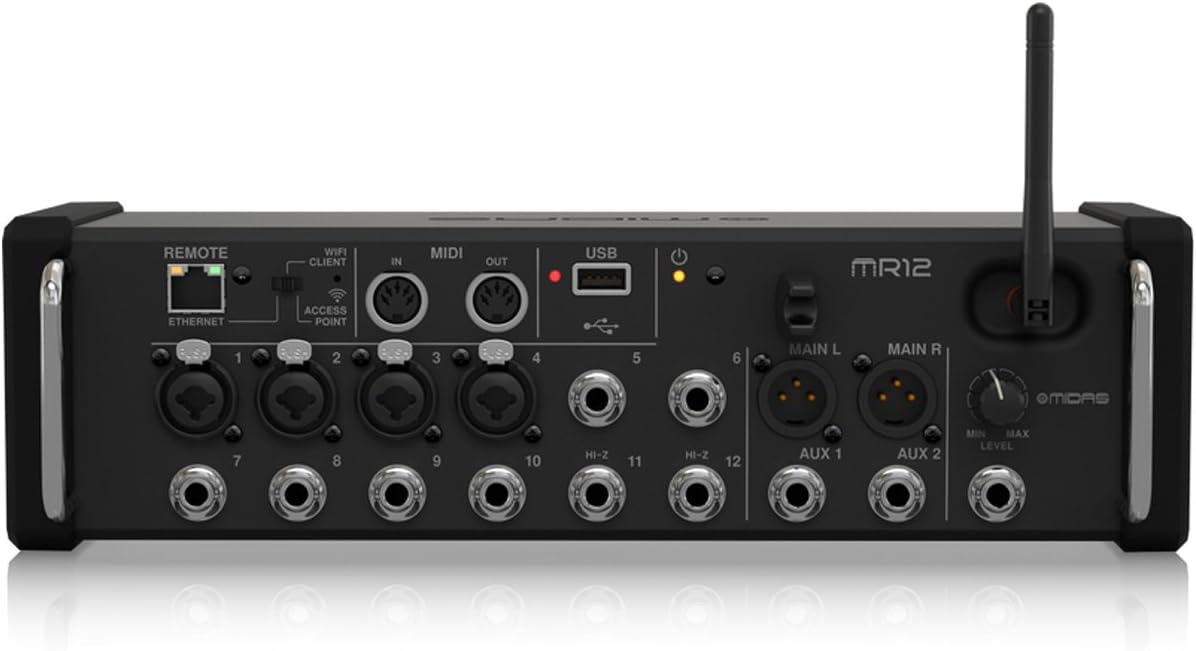 Check Price On Amazon
In pro audio mixers Midas is a legendary name. The MR12 looks almost similar to the Behringer XR12 and they are the same in many ways; but, the Midas MR12 has a few things up it’s sleeve that justify the bigger price tag! The four Midas Pro preamps housed in the MR12 are potentially the greatest upgrade. They are the exact same low-noise, high-resolution preamps used in both the Midas Pro Series mixers and the M32. If you’ve ever priced nice preamps for recording purposes, you know you can spend thousands on just one terrific preamp.
You get four superb preamps in the Midas M12! The Software is another difference. The effect engines are the very same effect engines that are used in the digital console M32! The Midas MR12 has the same list of input and output channels, recording or playback on USB 2-channel, onboard Wifi, ethernet, midi, and rack mount as the Behringer XR12. But if you need preamps and effects of Pro quality for a genuinely professional sound, then the MR12 is your best choice. 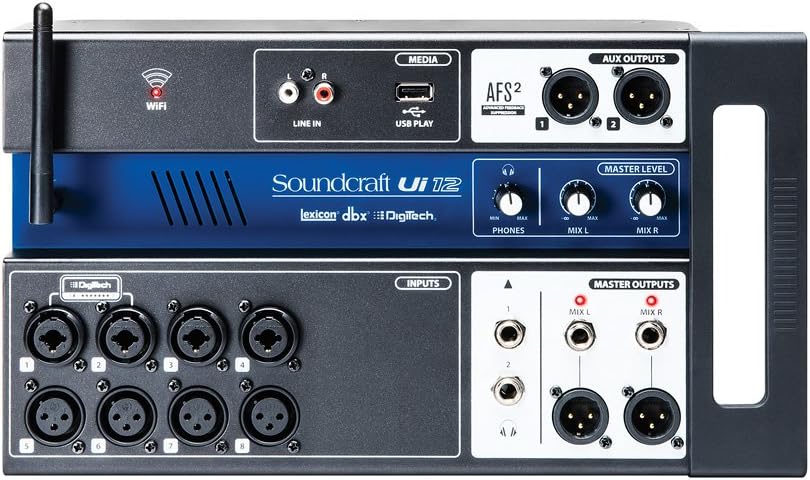 The Soundraft Ui12 is similar to previous wireless mixers, as it has advanced capabilities in software and effects. The mixer’s minimalist format is similar too. Reminiscent of an Audio Snake’s stage finish. The number of inputs is significantly different, as the Ui12 has four XLR combo inputs and four standard XLR inputs as opposed to the four XLR combo inputs and eight XR12 and MR12 TRS inputs. A pair of RCA inputs and stereo USB playback is dedicated to the last of the Ui12 ‘s channels. The Ui12 has a Wifi adapter onboard, and an ethernet jack to connect to a different network switch or modem.

The Soundcraft Ui12 has two software features the XR12 and MR12 don’t have: dedicated modeling of Digitech amps and suppression of DBX feedback. The amp-modeling is good to insert every electric guitar or bass into the great sound directly! Suppression of built-in input at the key outputs is always a good function for any live performance. Another feature that distinguishes this mixer is that it can be operated by any compatible HTML5 phone, tablet, or device.

I once owned the Soundcraft Ui16, and considered it all amazing and easy to use capabilities. I gave the unit back because I felt it was too loud. I’m not sure if it’s a problem with the preamps or the outputs, but I’ve tried many combinations of inputs and outputs and they’ve all been plagued with too much background hiss to my liking. 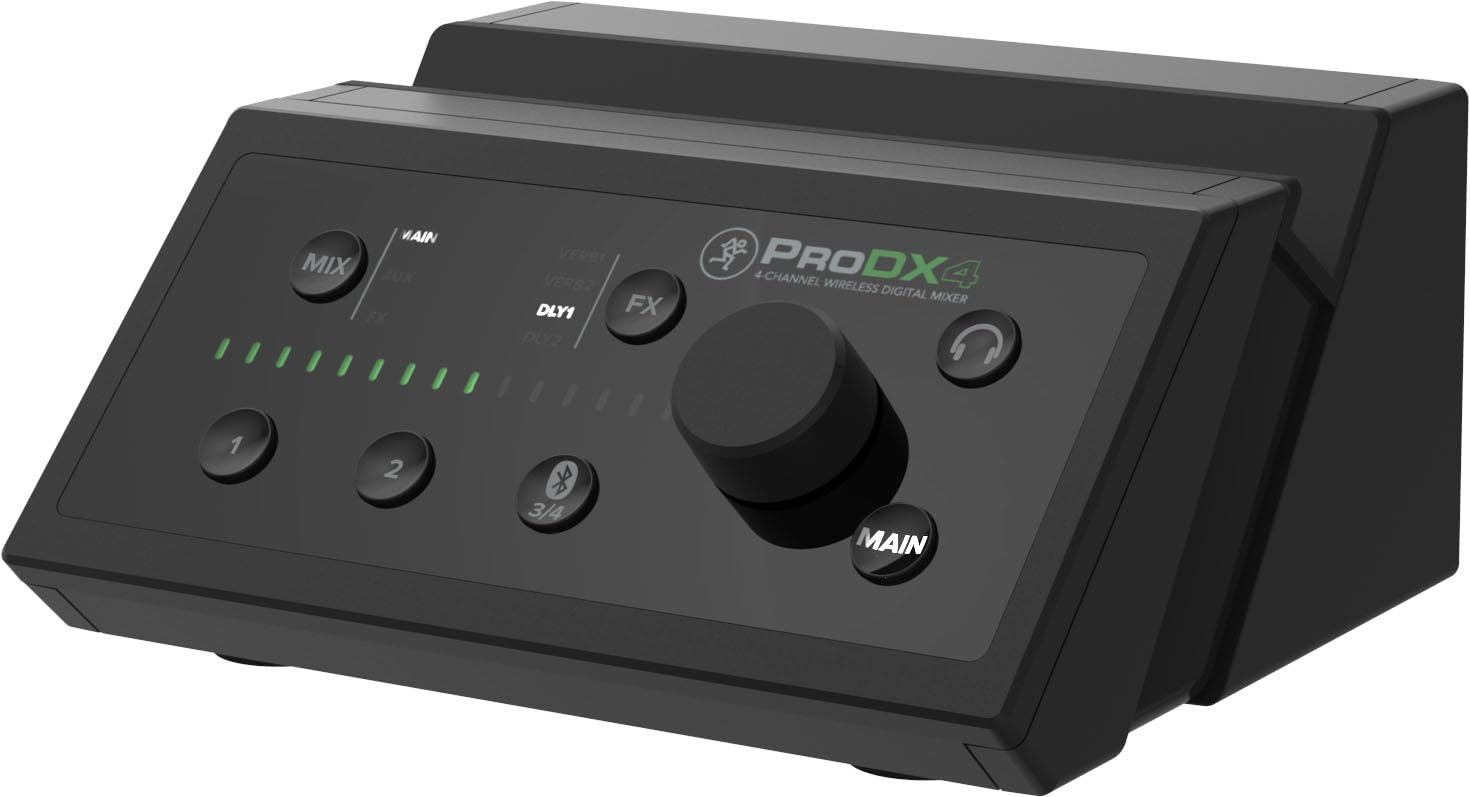 The Mackie ProDX4 is a completely different take on the tablet-controlled mini wireless mixer. It’s actually designed to be controlled by either an iPhone or an Android phone rather than a tablet! A Larger variant of the ProDX4, the Mackie ProDX8, is also available. The ProDX4 provides a 1/8′′ stereo input for tablets, phones, or media players with two XLR combo inputs. Bluetooth is used for mixer power as well as for music sharing through an iPhone or Android device. The ProDX4 was designed with simplicity and ease of use in mind when it comes to the program.

It doesn’t contain all the bells and whistles of the recently mentioned mixers, but the fundamentals for balancing and mixing are definitely present. Each channel has an EQ, low pass filter, and compression band three. — channel also has 16 effects, including reverbs, delays, and chorus. The outputs often include an EQ graphic for easier monitoring of the mix. You can control all mixer settings from a single knob at the front of the mixer. Now how’s that for simplicity on wireless. The Mackie ProDX8 has the same features as the ProDX4 but with four additional inputs to the XLR combo!

I purchased a Mackie ProDX4 for my Bose L1 Compact and I am incredibly pleased with that! It provides all the missing choices I wanted in one tiny box to use with my L1 Compact. If you’re a singer songwriter looking for fantastic sounding effects for your concerts, wireless control and bluetooth audio, this is the mini mixer for you!! The echo is crystal clear. Wireless access is better than I expected it would be and the bluetooth audio can be either from the same phone or from another device. For a great portable mini mixing solution, pick this little machine up. You won’t be ashamed!

The Best Tablet Controlled Mixer Up To 12 Channels

I assume the Behringer XR12 is the best tablet controlled mixer with up to 12 channels for the price based on my knowledge and analysis of these wireless mixers. I do like the Midas MR12 because of its higher performing preamps and effects, but assume the XR12 can do more than the job with most live music performances. It is an total bargain at price level! Based on my own experience with wireless mixers from the Soundcraft Ui Series, I was pleased with its functionality and user-friendliness but dissatisfied with the noise the mixer produces.

As with the Mackie mini mixers, I’m personally more impressed with the Mackie ProDX4 due to its size and price. This tiny wireless mixer could be the ideal solution for breathing new life into my portable Bose L1! Stay tuned for more controller reviews with wireless tablet controls.